When the Air Force needed a bulletproof, rapid constructed hangar, they called RapidBuilt

The United States Air Force demands the absolute highest quality and reliability from its vendors. So, when they search for a new manufacturing partner to help them defend the country, they don’t cut any corners in testing to ensure everything meets their rigorous standards.

RapidBuilt was invited to participate in the evaluation process for expeditionary buildings that could be deployed anywhere in the world using 20 ft sea containers. The requirement was for a 92’ x 112’ x 45’ Building, and a designed wind speed of 151Mph.

The trial building was built at Tyndall Air Force Base, on the Florida coast near Panama City. This stretch of Florida coastline is no stranger to heavy winds, as hurricanes often come through the Gulf of Mexico. RapidBuilt was eager for the Air Force to discover their building’s industry-leading strength and resilience — but they had no idea that nature would offer the ultimate test.

Two weeks after completion of the open building, which took 90 hrs to construct with a crew of 8, Florida received word that a hurricane was on its way. Citizens, as well as airmen at the base, took the usual precautions to prepare for its arrival.

However, what hit was far from the norm. Hurricane Michael was the first Category 5 hurricane to ever strike the Florida panhandle, with peak winds up to to 170 mph. As the storm slowly passed over Tyndall AFB, its relentless winds assaulted the testing area, flattening a competitor’s storm shelter when the winds were only 65 mph. Then, to make matters worse, a 7 ft. tidal wave crashed through the area.

When the storm had passed, Air Force personnel discovered that Michael had destroyed nearly $11 billion worth of buildings and fighter jets in its fury, leveling acres of structures to their foundation.. But when they made their way to the Rapidbuilt’s staging area, they discovered something remarkable — the RapidBuilt Shelter, rated for 151Mph winds, was the one structure left standing. It survived with wind loads up to 30% higher than its design speed. 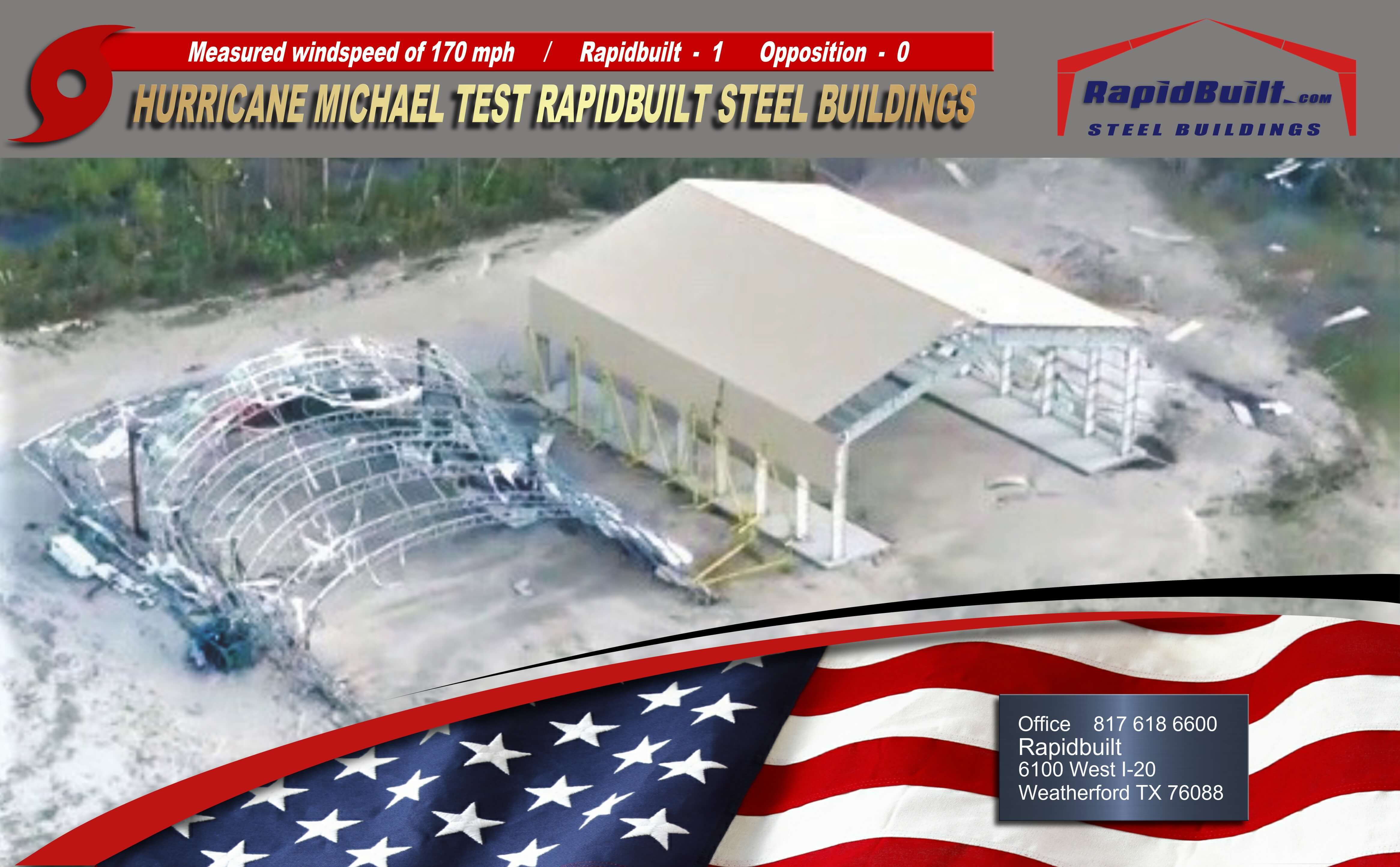 It was thrown to the wolves, and came back for more

Thanks to its proprietary beam design providing superlative strength, the sight of this RapidBuilt structure standing tall while surrounded by rubble was the ultimate proof of its claims. There was no test the Air Force could conduct that could better demonstrate the resilience that stemmed from RapidBuilt’s top engineering experts.

As a result of this trial building, Rapidbuild was asked to supply enclosed dual-purpose hangars/storm shelters for the F-35’s with a designed wind speed of 185Mph. .

As an effective shelter for their of F-35s, there could be no smarter choice than what RapidBuilt could provide.

The Lockheed Martin F-35 Lightning II is the Air Force’s newest weapon for its global peacekeeping missions. This marvel of engineering, a stealth multirole combat jet with STOVL (short take-off and vertical landing) capabilities, costs nearly $80 million apiece, so the Air Force wanted nothing less than the absolute best to protect it.

This real-world demonstration of RapidBuilt’s groundbreaking engineering led to the military embracing it for protection for its equipment. RapidBuilt’s buildings, due to their strength, cost and easy transportability by container, became integral aspects of advanced warfare missions and expeditionary work on the front lines.

When other builders produce buildings that are “good enough”, RapidBuilt is creating structures that meet the toughest demands you could find. The term “MIL-SPEC” is often heard, referring to only the best of the best, proven to serve at peak performance, maintainability and ease of maintenance. So when the U.S. Military finds RapidBuilt’s steel structures to meet or exceed these rigorous standards, it’s one of the most powerful endorsements a manufacturer can receive.

Get a quote for your RapidBuilt Steel Building

We’ve partnered with key lenders to provide you with fast and easy financing options to accelerate your construction projects. READ MORE